ZF is a leading global technology group in driveline and chassis technology as well as active and passive safety technology. 137,000 employees work at the approximately 230 locations in 40 different countries. The previous employee ID cards differed at each location in terms of technology, programming and design. This is now a thing of the past. 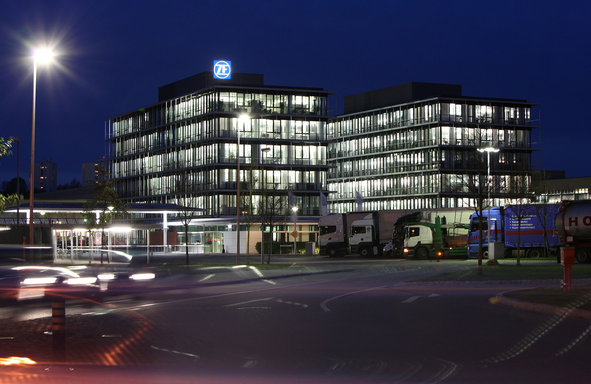 ZF wants to further strengthen the company’s identity and bring the various locations closer together, initially in Germany and later worldwide. The new uniformly designed Group ID card has a technical basis that enables the cross-location use of ID card functions, e.g. access and payment.

Thanks to its own operator licence from LEGIC, ZF is now able to define data structures on the ID card itself and determines which functions are linked to the card. Such functions are, for example, (offline) access, time recording, gastronomy or secure printing. This has the advantage that open standards can be used and ZF thus gains independence from manufacturers. In the current version of the Group ID specification, it has been possible to define an open standard with regard to the data structure in the chip for the access, time recording and gastronomy functions. For example, the independent openCashfile standard from Common Smartcard is used in the catering area. openCashfile also offers cross-location operation with different catering operators.

With the resulting gain in control, the tasks become more demanding, which are now no longer solved by manufacturers, but in-house at ZF. In order to cope with the complexity of these tasks, ZF is supported by the consulting firm Blaser Consulting. The ZF ID Card project team has extensively tested the various functions and the associated reference systems at the Friedrichshafen site. First, a laboratory test was conducted with 26 employees, in which a medium and the associated technology were defined. For the subsequent field test, 395 new CTC (cross-standard transponder chip) badges were issued containing both the old and the new technology. All functional tests were successful.

The mass production (personalisation and encoding) of the new Group ID card is carried out by ZF in-house in ID card centres. For this purpose, ZF uses the flexible card management solution StigmaTag by Vision ID Engineering in combination with high-performance retransfer card printers. StigmaTag is also used in individual ID card offices, where employee ID cards can be issued on site.

Since January 2015, around 10 000 badges have been issued at the Friedrichshafen site. At the beginning of 2017, the Dielingen site was equipped with 4 500 new Group ID cards. In Dielingen, 60 vending machines, 7 charging stations and 6 cash registers are operated with openCashfile from Common Smartcard. The Common Smartcard member Dallmayr Card Systeme is the operator for the communal catering there. Other locations are being converted on an ongoing basis.

Achim Genannt, who is responsible for planning the technical building equipment at ZF, formulates the advantages of the new group card as follows: “Thanks to the neutral advice, we use standardised segment structures as far as possible. The use, of the market-established standards LEGIC access and openCashfile from Common Smartcard, fully meets our requirements in the area of access and payment.”

Blaser Consulting is a LEGIC certified consulting company and a supporting member of Common Smartcard.

As a national and international provider, Dallmayr can offer top quality coffee products, selected vending machines, innovative payment systems and the complete operating and technical services as a complete package from a single source. Dallmayr Card Systeme is a full member of Common Smartcard.